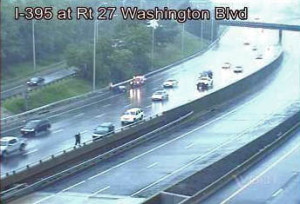 Update at 1:15 p.m. — Another accident has occurred on the same stretch of highway. One minor injury has been reported.

As seems to happen quite often during heavy rains, an accident has occurred on southbound I-395 just past Washington Boulevard.

Three vehicles were involved in the accident. One vehicle ran into the guardrail on the right side of the roadway, while the other two smashed into the barrier on the left side, blocking the lefthand lane.

Currently, only two lanes are getting by the accident scene, producing a small backup.

This curvy stretch of I-395 is particularly accident-prone during rain. We’ve reported at least three accidents there this year, one of which was a roll-over accident.