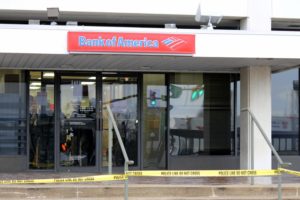 (Updated at 6:40 p.m.) Police responded to reports of a robbery at the Bank of America at 3401 Columbia Pike this afternoon. The bank is closed and both main entrances are blocked off as the police conduct their investigation.

The suspect is described as a male around 20 years old, wearing a black ski mask, black jacket and black pants. However, initial reports suggest he may have been taking off articles of clothing as he left. He implied he had a weapon and took off on foot.

Police officers and police dogs have been searching the area for the suspect.