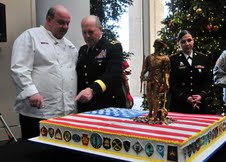 A famous face visited Arlington to help the National Guard celebrate its 375th birthday on Tuesday. Mauro Castano from TLC’s hit show “Cake Boss” showed up with a tasty treat in hand.

Castano and crew drove the cake down from their Hoboken, NJ bakery to the Army National Guard Readiness Center in Arlington. The New Jersey National Guard assisted in the transport and during the four hour drive.

Several months ago, a member of the New Jersey National Guard contacted Castano and asked about creating a cake for the birthday celebration. Despite being involved with “Cake Boss” and two other spin-off programs, Castano was eager to contribute to the event.

The two-foot by three-foot cake sports a replica of the Minuteman statue on top, a symbol Castano researched and decided should be a focal point of the cake.

“You know what,” said Castano, “we’ve got to put that in there. That’s the symbol of the National Guard.”

The Minuteman is made of chocolate, and like every other decoration on the cake, is edible. Along the sides, all the states and territories the National Guard serves are represented by patches made out of sugar.