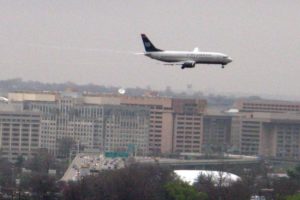 US Airways will be adding nonstop service to 11 new cities via Reagan National Airport starting on March 25.

The airline announced the new flights earlier this week. The changes are being made possible by a “slot swap” agreement with Delta Air Lines: Delta is ceding some of its slots at Reagan National in exchange for slots at New York’s LaGuardia Airport, plus cash.

US Airways expects to add 125 new jobs at Reagan National as a result of the new flights and the addition of a new US Airways Club at the airport.

“We are excited to expand our service to customers traveling to and from our nation’s capital as well as increase jobs at Washington National Airport,” US Airways Chairman and CEO Doug Parker said in a statement. “When our expansion is completed, US Airways will offer more than 230 daily flights and directly support more than 1,500 aviation jobs at Washington National.”

US Airways is adding nonstop flights to the following 11 cities from DCA:

In addition, US Airways will be adding daily flights to Bangor, Maine and Savannah, Ga., which are currently only served via Reagan National on weekends. Nonstop flights will also be added to Hartford, Conn.

US Airways expects to announce more routes in February. The airline was formerly headquartered in Crystal City.