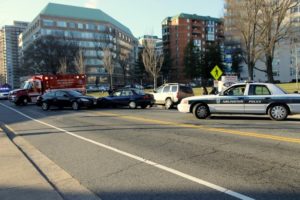 The already busy morning commute proved to be more hectic due to an accident that shut down part of N. Quincy Street. Two cars collided directly in front of the Central Library (1015 N. Quincy Street).

Police shut down Quincy Street from Washington Boulevard to Fairfax Drive while conducting their investigation. Although it’s currently unclear if icy roads contributed to the accident, a salt and sand truck was called to the scene due to police reports of ice.

Drivers are reminded to use extra caution because this week’s quick temperature drop has caused ice to form on certain streets that may not traditionally be known for icy conditions.