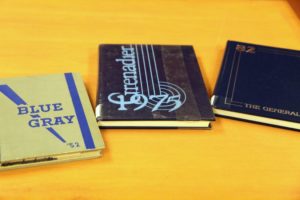 (Updated at 3:25 p.m.) If you attended high school in Arlington, you have something in common with Warren Beatty, Shirley MacLaine, Katie Couric and Sandra Bullock. All are immortalized in yearbooks at Arlington Central Library (1015 N. Quincy St), but the collection isn’t complete. That’s where you can step in to help.

The Virginia Room at the Central Library is asking for donations of Arlington high school yearbooks in good condition. That way, your accomplishments can be put on display for all to see, along with Sandra Bullock’s time as a cheerleader at Washington-Lee or Katie Couric’s work (quite foreshadowing) in the Yorktown Quill and Scroll Club. Hopefully, there’s no issue over the spelling of your last name like Shirley MacLaine and her brother, Warren (Beaty vs. Beatty).

In addition to the yearbooks, visitors to the Virginia Room can browse through the reference collection of the state’s historical items including maps, photos of the County from decades past and a local newspaper archive.

Judith Knudsen and John Stanton work in the Virginia Room and help visitors hunt down resources. The process will become a little easier on February 1, when the collection, including around 600 photos, will begin to be digitized and put online for public viewing.

The high school yearbooks the library would like can be from any year between 1951 and 2010. It’s fine if the books have writing in them, but they must be without mold and mildew. Duplicates are welcome, but the Virginia Room is specifically missing the following yearbooks:

Donations can be made in person. For more information, call 703-228-5966 or email the Virginia Room.