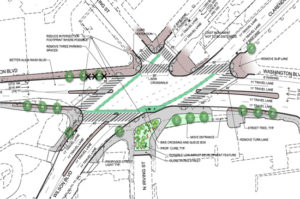 A widely disliked Clarendon intersection will be revamped in the next couple of years. The County has released preliminary plans for the area sometimes referred to as Clarendon Circle.

Based on a study of the intersection at Washington, Wilson and Clarendon Boulevards, the plan provides safety improvements for drivers, bicyclists and pedestrians. Eight other nearby intersections would also be affected by the changes in traffic flow.

County staff examined the study’s suggestions and narrowed down the ideas into one design proposal. Feedback is currently being accepted on the initial proposal via an online survey.

The first round of public forums addressing the improvements will be scheduled soon and will continue throughout the spring. A finalized plan and ground breaking is expected sometime in 2014, at the latest.