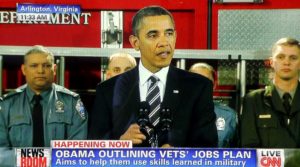 President Obama chose Arlington’s Fire Station No. 5 (1750 S. Hayes St) as the place to deliver a speech about the creation of a new Veterans Jobs Corps.

Around 11:30 a.m. the President arrived at the fire station via motorcade and took the stage to announce his new $1 billion initiative, which he highlighted during the State of the Union address last month. The program particularly targets veterans who have served since 9/11 — a group whose unemployment rate is currently hovering around 13 percent.

“Our veterans are some of the most highly trained, highly educated, highly skilled workers that we’ve got,” said the President. “These are Americans that every business should be competing to attract.”

Under the initiative, 20,000 veterans will be put to work over the next five years on a Veterans Job Corps conservation program, which will “restore our great outdoors by providing visitor programs, restoring habitat, protecting cultural resources, eradicating invasive species, and operating facilities,” according to the White House. The corps will also “repair and rehabilitate trails, roads, levees, recreation facilities and other assets.”

In addition to the Veterans Job Corps, the president announced that he will seek $5 billion in funding to boost local police and firefighter hiring. Preference for those jobs would be given to post-9/11 veterans.

The president explained that in addition to contributing to the overall good of communities, there will be specific financial benefits for taking part in the initiative.

“Today, we’re announcing that communities who make it a priority to recruit veterans will be among the first in line when it comes to getting help from the federal government,” the president said.

A number of roads shut down between Pentagon City and Crystal City to accommodate the presidential visit. Other impacts were also evident, such as increased police and fire presence at Pentagon City mall, the closure of Aurora Highlands Park and the late opening of the Aurora Hills Library. Arlington County Police helped with diverting pedestrians and controlling traffic while roads were shut down.