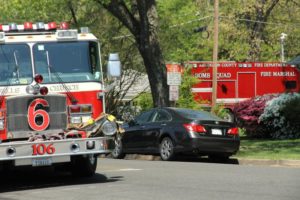 (Updated at 1:55 p.m.) The Arlington County bomb squad has packed up and left the scene near Cherry Hill Park in Falls Church, where earlier they were investigating a potentially explosive device.

Crews had been assisting police and fire units from Falls Church, after a resident called about a suspicious device this morning. According to City of Falls Church Communications Director Susan Finarelli, the resident had been digging in his yard in the 200 block of N. Virginia Ave., when he found a potentially hazardous device. Arlington’s bomb squad was called in to assist.

The item in question was found to be an antique military device, and was deemed safe. The military will dispose of the item.

“Nobody was hurt, and now with the bomb squad here, nobody should be hurt,” Finarelli said earlier.

The park and streets around Cherry Hill Park were closed down for more than two hours during the investigation, and several homes were also evacuated. Everything in the area has been re-opened.