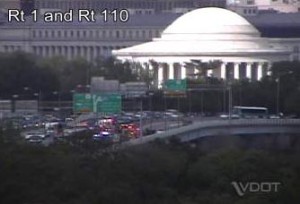 The inbound (northbound) HOV lanes of I-395 are blocked over the Potomac River due to an accident.

The accident reportedly involves at least one overturned vehicle and two injuries. Arlington firefighters and medics are on the scene, though the accident is closer to the D.C. side of the river.

HOV traffic is at a standstill approaching the 14th Street Bridge. Drivers should use the mainline of I-395 as an alternative, avoiding the HOV lanes.