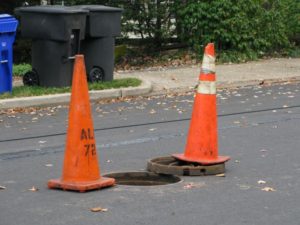 Arlington’s aging sewer lines will be getting some updating in the coming months.

The County Board has awarded a $1.92 million contract to AM-Liner East, Inc., to reline sewer pipes throughout the county. That contract includes work to a main line that runs along Four Mile Run Drive, from Columbia Pike to Walter Reed Drive.

A second contract, worth $360,000, was awarded to AM-Liner East, Inc., to rehabilitate sewer manholes. The work prevents water from seeping into the system and overwhelming the treatment plant, which could force a release of partially treated sewage into Four Mile Run.

The county has 13,000 manholes, and the ones receiving first attention are located in Crystal City. Evaluations and repairs on others will follow.

Arlington’s sewer system is made up of 465 miles of mains. Each year, the county’s Capital Improvement Program funds rehabilitation on about 1.5 percent of the system, which typically covers seven miles of pipe.