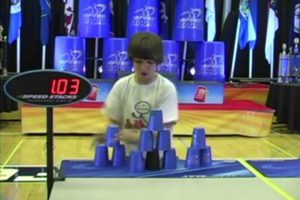 The 11-year-old Arlington kid who won a sport stacking championship in Colorado in March has racked up a new title.

William Polly, of Penrose, has been named World Sport Stacking Champion for the second year in a row. That’s according to The Wauneta Breeze, a local newspaper in the Nebraska town where Polly’s grandparents live.

Not only did Polly capture the coveted Individual All-Around honors at the tournament — with a combined time of 9.34 seconds in the 3-3-3, 3-6-3 and cycle sequences — but he’s also getting another TV appearance out of it.

Tomorrow, Polly is scheduled to appear on Live! With Kelly, where he’ll challenge host Kelly Ripa to a timed cup stacking competition. It won’t be the first time Polly has appeared on national television; last year he showed off his skills on the Tonight Show with Jay Leno.

This year’s World Sport Stacking Association tournament was held in Butzbach, Germany. Despite the fact that there are active stacking competitors in 19 countries, this was the first time the international, invite-only competition has been held outside the United States. Polly was one of 250 participants.