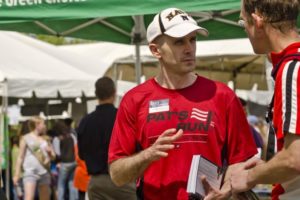 Arlington’s two Democratic congressional candidates — incumbent Jim Moran and challenger Bruce Shuttleworth — are racking up some endorsements ahead of the primaries on June 12.

“I’ve been involved in Civil Rights and the Democratic Party for over 50 years in Virginia and across America. Today, we need a Progressive Democrat like Bruce Shuttleworth to be in the Congress,” Chavis said.

“Moran has precipitated a contentious relationship with the African American community and has failed to show adequate leadership in representing the 99% over the 1% big business interests that have massively contributed to his campaign,” Chavis added. “I am wholly convinced that Bruce Shuttleworth will never compromise his values – and that is why I am supporting him. Bruce Shuttleworth is a proven ethical leader.”

Last week, Moran received an endorsement from the LGBT Democrats of America PAC.

“Congressman Moran has a long history as a champion for our cause and devoted friend of our community,” said Tiffany M. Joslyn, PAC President. “His positions on issues important to LGBT Virginians, combined with his actual record of sponsorship on and votes for legislation supporting LGBT equality, make him the clear choice for our community.”

“The fact that both candidates in this primary sought the endorsement of the LGBT Democrats of Virginia PAC is a very positive sign for both the Democratic Party and Virginia,” said Joel McDonald, PAC President-Elect. “While both Moran and Shuttleworth agreed with our positions on the issues, Moran’s longtime dedication to, and record of, fighting against discrimination was the deciding factor.”

Update at 4:40 p.m. — A spokesman for the Moran campaign says the congressman has also received endorsements this year from the Sierra Club, the International Association of Firefighters, Sen. Jim Webb, Sen. Mark Warner, Gov. Tim Kaine, and state Sen. Adam Ebbin. The Shuttleworth campaign has a list of endorsements on its website.