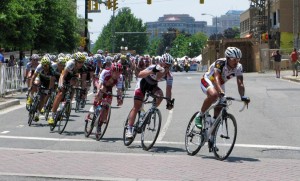 (Updated at 1:55 p.m.) Thousands of spectators will line the streets of Arlington this weekend, as bicyclists roll through for The Air Force Cycling Classic.

This Saturday, June 9, the event kicks off with the Clarendon Cup, near the Clarendon Metro. There will be a number of races throughout the day for men and women of various abilities. There will also be a children’s event. On Sunday, June 10, the action moves to Crystal Drive in Crystal City.

Registration can be found online, and the schedule is as follows:

A number of roads will be closed for the races, and the Arlington County Police will be helping to direct traffic. Parking may be restricted in the affected areas, so residents should look for temporary “No Parking” signs. Illegally parked vehicles may be ticketed or towed. The closures are below: