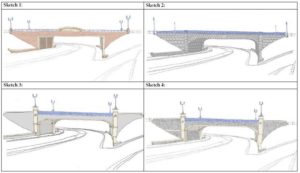 The county is going to replace the Carlin Springs Road Bridge, which goes over George Mason Drive, and wants resident input on how the new bridge should look.

Although still structurally sound, the 51-year-old bridge is apparently the most deteriorated of the 25 throughout the county. The new bridge will be improved structurally, and widened to increase safety, particularly for bikers and pedestrians.

Currently, the entire bridge is 65 feet wide. The bridge widening proposal suggests increasing that to 69 feet. Under the plan, the existing sidewalk, which is five feet wide, would become eight feet wide, and a five foot bike lane would be added. The four lanes of vehicle traffic would remain, but there would no longer be a center median.

Ritch Viola, a transportation planning supervisor with Arlington’s Department of Environmental Services, said the bridge replacement is part of a larger overall project to change the nature of Carlin Springs Road. Over the next few years, there will be a series of improvements stretching to Glebe Road. The addition of elements such as curb extensions and wider sidewalks is aimed at improving safety on the road.

“We’re trying to manage some of the speed that’s out there now, as well as provide facilities for bikes and pedestrians,” Viola said. 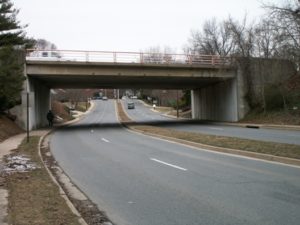 Although the county will deal with the architectural logistics of replacing the bridge, residents are asked to give feedback on the aesthetic aspects. The online survey for the designs is available through July 11. Once suggestions are sifted through and a final proposal is devised, the county needs to get approval from VDOT, which is funding the project.

There will be a public meeting about the concept sketches next Tuesday, June 26, which will include presentations and an opportunity for public comments. It will be held in room 104 of the Lubber Run Community Center (300 N. Park Drive), at 7:00 p.m.

County staff expect construction on the project to begin late this year or early next year. Efforts will be made to maintain access across the bridge during construction, which is expected to last about a year.