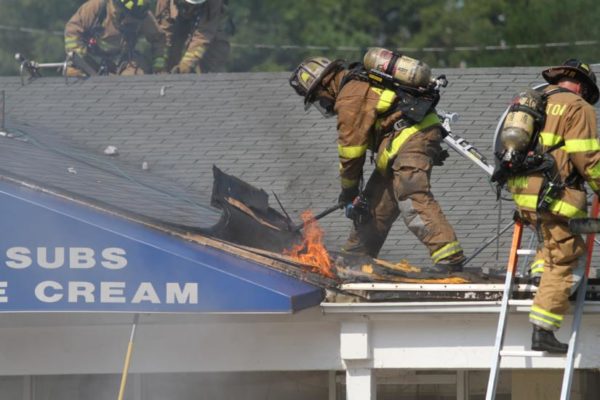 (Updated at 10:40 a.m.) About two dozen firefighters battled a fire at the Lucky Seven Food Mart at 2406 Shirlington Road in the Nauck neighborhood this morning.

The original call for smoke and flames coming from the store’s roof came in around 9:30 a.m., and drew firefighters from Arlington, Alexandria, Ft. Myer and Fairfax County.

Firefighters used picks and chainsaws to cut holes in the roof in an effort to extinguish the flames. Other firefighters inside the store used thermal imagers to find hotspots in the ceiling.

The spectacle attracted a crowd of nearly three dozen neighbors. Shirlington Road was closed in both directions during the fire, forcing cars and buses to find alternate routes.