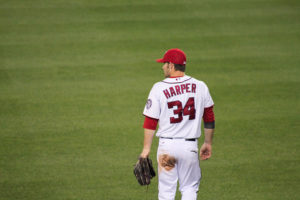 Nationals star Bryce Harper, perhaps most widely known for calling out a reporter for asking a “clown question,” has received a request to try out a new career — firefighting.

The Cherrydale Volunteer Fire Department recently discovered that Harper, an Arlington resident, has always had aspirations of becoming a firefighter. That prompted a formal invitation to the All Star, and any interested teammates, on Friday.

The department learned about Harper’s desire from the Nats blog, which posted a question and answer session with the player.

We noticed that Washington Nationals rookie outfielder Bryce Harper, when asked by a fan what he’d be doing if he wasn’t playing baseball, responded that: “I’d probably be a firefighter. Ever since I was growing up, I wanted to be a firefighter or a baseball player. Going into the offseason, I’m going to get my EMT and do the firefighting thing so I have something to fall back on.” Recognizing Mr. Harper’s inner calling as something more than just a savvy PR move, the Cherrydale Volunteer Fire Department invites Bryce Harper, and any other Nat who’d like to come to check out the fire service in the offseason. We’ll look forward to seeing you at our November meeting.

So far, neither Harper nor the Nationals responded to the Cherrydale Volunteer Fire Department’s invitation.