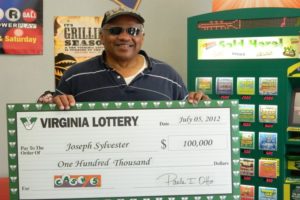 One lucky Arlington man has a lot to celebrate, after winning $100,000 in the Virginia Lottery Cash 5 game — for the second time in three months.

Joseph Sylvester won the top prize for matching all five numbers in the daily drawing on July 3. He had done the same thing exactly three months earlier, on April 3.

Once he realized he had won again, Sylvester wasn’t fazed by the prospect of holding the big check in front of all those cameras.

“Gotta get my picture taken again,” Sylvester said. “The second time is a little more routine.”

Sylvester hasn’t said yet what he’ll do with his new winnings. He used the money he won in April to pay bills and buy a new truck.