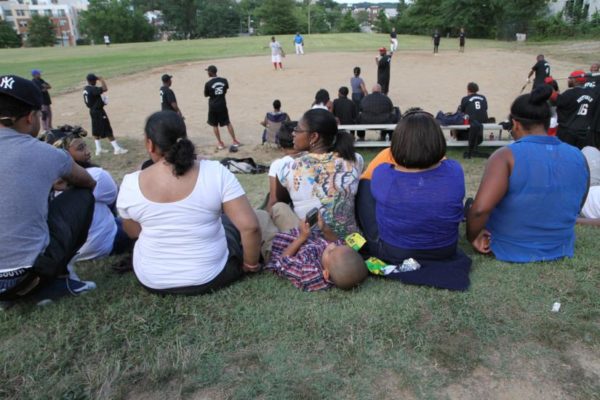 The game — between the WPGC “Naturals” softball team and a team of local residents — was part of the radio station’s “Knocking Violence Out the Park” campaign. The Naturals have previously faced off against teams of police officers and residents in various parts of D.C. and Maryland as part of the campaign.

There was a police presence at last night’s game, which was held at Drew Model Elementary School; a member of the Arlington County Police Department’s gang unit played on the Nauck community team.

Former candidate for County Board Terron Sims, who helped WPGC organize the event, said the game was all about bringing the community together in a fun way.

“The message is… about unifying the community in all our actions, whether it’s taking care of our kids, or crime prevention, or anything of that nature,” Sims continued. “It takes the community as a whole to move forward in a positive manner.”

In addition to the game itself, the event featured food vendors, kids activities, and a voter registration drive.