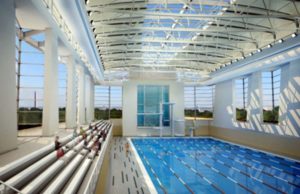 A petition from the Friends of Long Bridge Park containing more than 2,400 signatures has made its way to the County Board, asking for funding to construct the Long Bridge Park Aquatics, Health and Fitness Center.

The County Board is scheduled to vote on Saturday (July 21) on four referenda to be included on the November 6 ballot. The Local Parks and Recreation referendum includes $42.5 million for the proposed aquatics center. That would cover a portion of the total cost, which is estimated at more than $70 million.

The aquatics center has been a hot topic, and generated much discussion at a Capital Improvement Plan hearing last month. Opponents say the facility would put too much of a long-term financial burden on the county and on taxpayers. Others say the funds should instead go toward more essential projects such as repairing infrastructure.

One high profile supporter of the aquatics center is Arlington native Tom Dolan, winner of two Olympic gold medals in swimming. He recently wrote an email to the Board emphasizing the importance of this type of facility in the county, highlighting the community programming and revenue benefits to the county.

“Arlington has been waiting a long time for a facility of this magnitude,” said Dolan.

In addition to the aquatics center, the petition requests funding to complete other planned developments at Long Bridge Park over the next 10 years. Those include a fourth synthetic turf sports field and a pedestrian/bicycle bridge over the George Washington Memorial Parkway to the Mount Vernon Trail.

Petitioners note that the park plans were based on a county-wide recreational assessment in 2004, showing unmet demand for aquatics, outdoor field sports and recreation such as nature walks. They say the improvements and additions at Long Bridge Park would fill these demands by providing a place for people of all ages to enjoy events and fitness opportunities.

“People who visit the first phase of the park are amazed by the transformation of a former brownfield into healthy green space,” said Eric Cassel, Friends of Long Bridge Park board member. “They want to see and enjoy its full potential as soon as possible.”