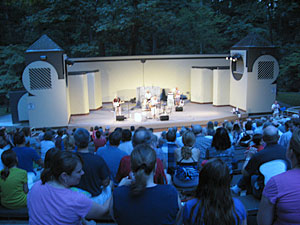 The Lubber Run Amphitheater will host a trio of events this weekend, including a Shakespeare play and a Hawaiian music and hula concert.

Lubber Run’s summer series of free outdoor shows will offer a change of pace with Traveling Players Ensemble’s performance of Shakespeare’s “As You Like It,” at 8 p.m. on Friday, July 27.

The series, which typically features local music acts, will welcome Baltimore-based band The Project, on Saturday.

Selected as a “Summer School in the Arts” by the NEA, Traveling Players Ensemble is a professional theater company dedicated to bringing great theater into the great outdoors through a thriving summer camp and year-round acting classes and workshops

The Project will play at 8 p.m. on Saturday, July 28. Also from the release:

Baltimore musicians Bob Goldberg (lead vocals and guitar), Eric McCleaf (guitar), and Jason Wilson (bass guitar and backing vocals) rock the house with everything from classic rock to current pop, with some 80s rock, 90s modern rock, and lots of other stuff in between.

Finally, a group from Arlington-based “native Hawaiian school” Halau O ‘Aulani will take the stage at 6 p.m. on Sunday, July 29:

Native music and dance presented by Halau O ‘Aulani, founded in 1996 for the sole purpose of creating a learning environment for students interested in the preservation of the multi-faceted cultures of Hawai’i with primary emphasis on the Hawaiian culture.