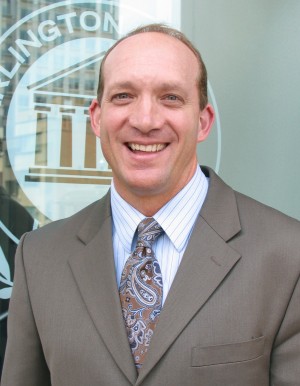 (Updated at 2:00 p.m.) County Manager Barbara Donnellan has announced a new director for the Department of Environmental Services.

Greg Emanuel has been named to the position, effective as of August 13. He will replace William F. O’Connor, who has held the position since October 2010, and is retiring from the county this month. Emanuel had served as the department’s deputy director since March.

“I am very pleased to have Greg join my Executive Leadership Team,” said Donnellan. “He has a proven track record of results, and a tremendous dedication and passion for our workforce and our community.”

Emanuel will be earning a salary of about $168,000 per year, according to Arlington County Human Resources Director Marcy Foster. That’s slightly less than O’Connor’s annual salary.

The department, which has more than 700 employees, manages the county’s infrastructure, transportation, the environment and capital investment.

In a press release, the county listed more of Emanuel’s experience and accomplishments:

During his time with the County, Mr. Emanuel led the effort for several major capital construction projects including Fire Station #3 on Lee Highway, Arlington Mill Community Center on Columbia Pike, Fire Station #5 in Aurora Hills, and Shirlington Library/Signature Theater. He also played an important role in partnering with the Department of Management and Finance on the development of three Capital Improvement Plans, each time increasing the scope, focus, and detail to demonstrate the full range and strategy of the County’s ambitious capital programs.

Prior to his experience with the County, Mr. Emanuel served 21 years with the U.S. Air Force, where he held a variety of engineering leadership positions around the world. While there, he managed multi-year capital improvement and redevelopment plans, significant construction projects and new initiatives while balancing political, cultural, regulatory and financial challenges.

He earned his bachelor’s degree in Civil Engineering from the U.S. Air Force Academy and a master’s of Civil Engineering in Construction Management from North Carolina State University. He is a registered professional engineer and a member of the Society of American Military Engineers and the American Public Works Association.

Mr. Emanuel, a fitness, cycling and swimming enthusiast, resides in Arlington with his wife and three children.