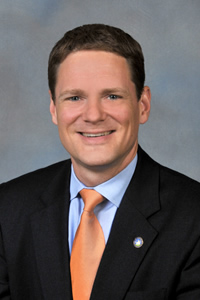 Voter turnout was low for Tuesday’s special election to secure a state delegate for the 45th District, but Democrat Rob Krupicka’s high numbers led him to victory.

Krupicka walked away with 75.7 percent of the votes. His closest competitor, Republican Tim McGhee, brought in 20.6 percent, followed by Libertarian Justin Malkin with 3.4 percent.

“Today was a victory for our community. It was a victory for everyone who believes that we should move forward together,” Krupicka posted on Twitter last night. “Thank you to everyone (and there are lots of you) who made this victory possible.”

The 45th District largely covers Alexandria, but also includes about 13,000 voters from southeast Arlington. Of the nearly 55,000 total active voters, a mere 15 percent showed up to cast ballots. 1,351 of them were from Arlington.

Last year, Adam Ebbin (D) defeated Krupicka in the state Senate Democratic primary for the 30th District. Ebbin went on to win against McGhee in the general election.

There is now a little more than a year remaining in Krupicka’s term.