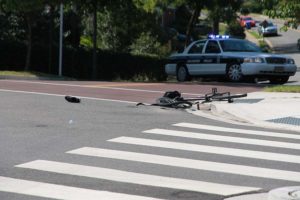 Police are releasing more details about an accident involving a bicyclist near Westover last Tuesday (August 28). Although details were sketchy at the time, they now consider it a hit and run.

At the time, police believed the cyclist may have had a medical emergency and fallen off the bike. That was based on a report from a person who claimed to have seen a cyclist experiencing what appeared to be a seizure, then falling to the ground.

According to Arlington County Police spokesman Dustin Sternbeck, the police investigation into the incident indicates the report of a medical emergency is inconsistent with what responders observed at the scene. Sternbeck says based on damage to the bicycle and emergency crews finding an unconscious victim bleeding from the head, the incident is now deemed a hit and run.

The driver left, no obvious evidence was uncovered at the scene and there were no witnesses who stayed to speak with police, so there is no suspect or vehicle description available.

Anyone who may have information about the accident is asked to call the ACPD non-emergency number at 703-558-2222.