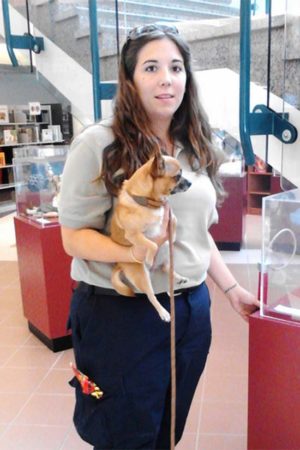 Scampering and whimpers could be heard among the books at Central Library on Saturday (September 15), when a lost dog ended up inside the confines of the building.

Library assistant Thinh Vu said he was preparing the building for closing, which was just a few minutes away, when he heard a commotion coming from the book store area. At first, he thought it might be a service dog, but he quickly saw that the six pound chihuahua was simply running loose.

“I thought, great, this is last thing I need during closing time,” Vu said. “I have a dog, I love dogs. It was cute, but it shouldn’t be in the library.”

Typically, dogs and other pets aren’t allowed at the library unless they are service animals or part of the “Paws-to-Read” program. When librarians tried to find the owner by making an announcement about the loose dog and nobody came forward, they realized this dog likely was not intentionally brought in. They noticed it didn’t have a collar and figured it was a stray that somehow found its way into the building.

That’s actually partially the case. The dog — named Bella — and her owners had been visiting Arlington resident Melanie Domres last weekend. While the humans were out for a bit, Bella used the dog door on Melanie’s home to get into the backyard, managed to squeeze under the fence of Melanie’s home near Quincy Park, and squeezed under a neighbor’s fence. Bella then apparently took off on a jaunt through the neighborhood, though it’s unclear exactly how she wound up in the middle of the library.

“Bella’s eight-year-old owner was in tears,” Domres said. “We were worried because she doesn’t live in an area with busy streets, so she may have panicked. The worst feeling, even worse than losing your own dog, is losing someone else’s dog.”

While Domres and her guests scoured the neighborhood, library staff tried picking up the pooch, but she was frightened and continued to run around the auditorium area. Bella then headed for the children’s section, where one of the librarians succeeding in picking her up and calming her down.

“Perhaps she was a dog whisperer, because the dog was very content in her arms,” Vu said. 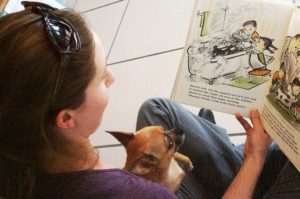 The dog was then kept in the lobby area until an animal welfare worker arrived. Librarian Kate Oberg says Bella looked awfully lonely all by herself, so Oberg decided to read her some dog themed books like “Harry the Dirty Dog.”

“She looked like she needed entertainment so I went and grabbed a couple of books, but she wasn’t even paying attention,” Oberg said. “She didn’t bark, was very well behaved and very cute.”

An animal welfare worker arrived on the scene quickly to claim the dog. After searching for more than an hour, Domres and her guests called Arlington County Animal Control and they said they had Bella. The six-year-old pooch was soon reunited with her owners, safe and sound.

“Judging by the pictures, Bella did not seem to be distressed at all,” said Domres. “I think she actually had fun on her adventure. Her owners definitely got a kick out of her ending up in the library.”

Domres said Bella and her owners will definitely be back to the neighborhood for future visits. However, the yard has been better secured to accommodate such a small dog. Domres said her dogs are larger, and she didn’t anticipate Bella’s ability to shimmy through tight spaces.

“Now we examined her escape route,” she said. “A small animal like that is a whole different ball of wax.”

In a thank you note to library staff, Domres wrote: “Perhaps she [Bella] felt the reading choices in my home were not sufficient to her tastes, or perhaps she recognized a friendly and safe place when she saw one. So please accept her owners’ and my thanks for taking her in and making sure she found her way to animal control, where we picked her up after giving them a call.”

Library staff is just happy Bella was safely reunited with her family, without even causing any damage to the library.

“I’m just glad it had a happy ending,” said Vu. “Luckily, they were able to find the owner.”