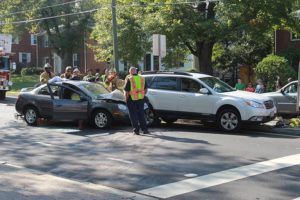 An accident in the Westover neighborhood closed Washington Blvd in both directions for more than an hour this morning (Saturday).

A little before 10:00 a.m., three cars became involved in an accident near N. Longfellow Street. Police and fire fighters blocked off Washington Blvd for several blocks while crews extricated a woman trapped inside her vehicle. She was transported to Fairfax Inova Hospital, and a person from another car was transported to Virginia Hospital Center with minor injuries.

Arlington County Fire Department spokesman Capt. Gregg Karl wasn’t able to give an update on the extricated woman’s condition. He did say regardless condition, it’s standard procedure to send a victim to a trauma center such as Fairfax if emergency crews had to remove the person from a vehicle.

The scene drew crowds and neighbors explained to each other what they had seen.

“A car came flying over the hill,” said a neighbor who witnessed the accident and wishes to remain anonymous. “People are going to keep doing that until somebody gets killed.”

A firefighter on the scene, however, said medics aren’t sure if the driver who was extricated may have experienced a medical emergency before becoming involved in the accident.