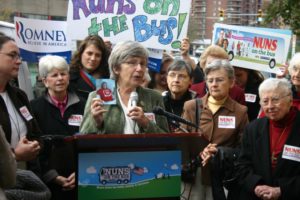 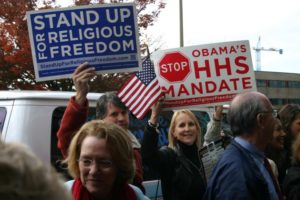 A group of nuns critical of Republican budget plans launched a one-day bus tour of Virginia today (Friday) in Arlington.

The advocacy group Nuns on the Bus held a reception, speaking program and press conference this morning at St. Charles Borromeo Church (3304 Washington Blvd) near Clarendon. The event was the launch of a one-day bus tour of Virginia, which includes planned stops in Richmond and Virginia Beach.

A reported crowd of nearly 200 supporters, and a few critics, turned out for the event. The nuns spoke about “moral budget priorities” and argued against cutting social welfare programs — a move they say would “further [enrich] the wealthiest Americans at the expense of struggling, impoverished families.” They singled out the budget proposal of Republican Vice Presidential candidate Rep. Paul Ryan as a plan that would hurt the needy.

A few protesters held signs at the rally critical of the Obama administration’s requirement that larger employers — including some religious employers — pay for for health insurance that includes coverage of contraception.

END_OF_DOCUMENT_TOKEN_TO_BE_REPLACED

More Stories
Jason Howell: Why You Should Vote For MePhotos: Obama Critics Offer Cheap Gas on the Pike