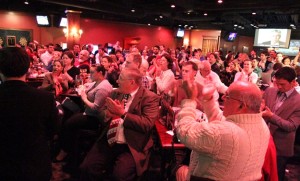 Whether you’re Republican, Democrat, or none of the above, there’s an opportunity for you to imbibe tomorrow night while election results come in.

Arlington Democrats will be watching the election returns on the big screen at the Arlington Cinema and Drafthouse (2903 Columbia Pike). The event, which starts at 6:00 p.m., features free admission, a hot food buffet ($10 or $12, depending who you ask) and a cash bar.

“We will be joined by volunteers, candidates, elected officials and the general public as we watch the returns, share stories from the campaign trail and celebrate democracy in action!” said Arlington Young Democrats spokesman Mike Lewan.

Arlington Republicans will be monitoring the election results on five televisions at RiRa Irish Pub in Clarendon (2915 Wilson Blvd). The grand ole party will include $3 Heineken and Newcastle all night, plus “some specials on some Americana type beers, likely Sam Adams.” Nachos and pretzels will be half off.

The event is officially being held from 8:00 to 11:00 p.m., but attendees are being encouraged to show up earlier and stay later. WiFi internet access will be provided for wonks who want to monitor real-time results and Twitter reactions.

The Arlington Green Party, meanwhile, will be holding a more subdued affair. The Greens’ celebration, which is being held at a private north Arlington residence starting at 7:00 p.m., will feature “vegetarian chili, corn bread, hot and cold drinks.”

Those hoping for a more non-partisan event can attend an “Election Day Decompression Session” at Iota Club and Cafe in Clarendon (2832 Wilson Blvd) on Tuesday. The free event will offer happy hour prices from 4:00 to 7:00 p.m. DJ Sam Snow will be spinning tunes from 6:00 until “late.” The DJing will be decidedly undemocratic: no requests will be taken.

“IOTA is a politics-free zone lovin’ the donkeys and the elephants and the indies,” said co-owner Jane Negrey Inge. “It’s all about togetherness!” 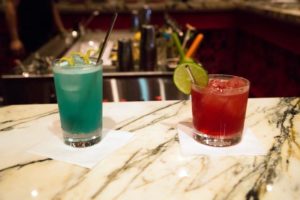 Capitol City Brewing in Shirlington (4001 Campbell Avenue) is hosting Election Day festivities all day on Tuesday. The event, from 11:00 a.m. to midnight, includes election-related programming on the TVs, $5 appetizers, half dollar wings and happy hour-priced pints of beer.

Some local restaurants are offering election-specific specials in the run-up to the election.

Read more →
More Stories
Small Fire at Berkeley ApartmentsLibby Garvey: Why You Should Vote For Me