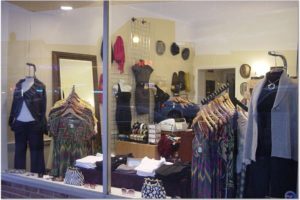 Sometimes it seems like Arlington is a revolving door for small businesses and restaurants, but one store owner in Crystal City is bucking the trend and holding an anniversary party. Gossip (566 23rd Street S.) is holding its “5 Year Anniversary Festa and Fashion Show” tomorrow (November 10).

Owner Katherine Glorioso, who hails from Falls Church, had known for years that she wanted to open a boutique featuring Southern California fashions. She started off by selling a few items at Eastern Market. After four straight weeks of selling out halfway through the day, Glorioso’s parents pushed her to set up a brick and mortar establishment.

Glorioso originally thought her boutique would fit well in Georgetown, but she discovered that rent prices were too high. Her goal was to keep all pieces of merchandise below $100 each, which would make it difficult to pay Georgetown rents. Her father tipped her off to a potential space in Crystal City. Upon seeing the area her father had suggested, Glorioso had a flashback to being on 23rd Street when she was younger.

“I used to walk down the block my store is now on and thought, ‘One day I’ll have something on this block,'” said Glorioso.

She credits her father, an entrepreneur, for assisting her with opening the store.

“It was so much hard work, but it was the best decision I ever made. I feel very blessed,” Glorioso said. “I worked my butt off, I knew what I was doing and I had my wonderful father to help along the way. I was going to make it no matter what. There was no option of failure.”

Gossip began in a small 450 square foot space, then expanded last summer. In addition to clothing and accessories, the expansion allowed for adding vintage clothing, undergarments, shoes and children’s clothing. Glorioso continues keeping her eyes open for potential areas for expansion, because she would eventually like to open a store in North Arlington.

As part of tomorrow’s anniversary celebration, Gossip will run a sale from 11:00 a.m.-10:00 p.m. Customers who purchase at least $25 worth of merchandise will receive a free goodie bag with a surprise inside.

Additionally, there will be a fashion show across the street at Tortoise and Hare Bar and Grille (567 23rd Street S.) at 8:00 p.m. It will feature items from Gossip’s fall and winter collections. The event is free to attend and there will be complimentary appetizers. Raffle tickets will be sold at the fashion show for five gift bags filled with up to $100 in merchandise from Gossip. The raffle tickets are $2 each and all proceeds will be donated to St. Jude Children’s Research Hospital.