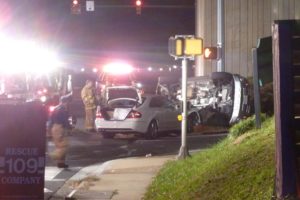 Two elderly women were taken to the hospital Friday night after an SUV rollover accident on Carlin Springs Road near Route 50.

The accident happened around 5:30 p.m. The women, driving in a hybrid Ford SUV, were attempting to take the ramp to Route 50 when they were T-boned by the driver of a Mercedes sedan, according to Arlington County Police spokesman Dustin Sternbeck. The vehicle rolled onto its side and against a light pole.

Firefighters had to extricate the women from the SUV using non-traditional means, Sternbeck said, since the roof of the vehicle was leaning against the pole. The women suffered minor injuries and were taken to Inova Fairfax Hospital.

No charges have been filed against either driver at this time, Sternbeck said.