The MarchFourth Marching Band, a contemporary marching band featuring stiltwalkers and fire-dancers, will be performing at Artisphere in Rosslyn (1101 Wilson Blvd) tonight, Nov. 14. 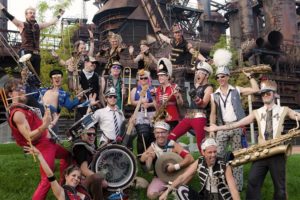 MarchFourth will take the stage at Artisphere’s ballroom at 9:00 p.m. Tickets are $15.

“MarchFourth Marching Band (M4 to its fans) is a kaleidoscope of musical and visual energy that inspires dancing in an atmosphere of celebration,” Artisphere said in a press release. “Visually enhanced by costumed dancing beauties, acrobatic stilt walkers, unicycles, life size marionettes and many more theatrics, M4 invokes dancing in the streets and beyond! The sound is huge, melodic and dynamic, taking audiences on a musical journey around the globe.”

The Portland, Ore.-based band, formed in 2003, has performed at the Burning Man Festival in California and as an opening act for singer Gwen Stefani.