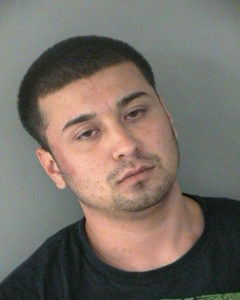 An Arlington man woke up in his Virginia Square bedroom early Thursday morning to find a stranger caressing his girlfriend’s face while she slept.

According to Arlington County Police Department spokesman Dustin Sternbeck, 25-year-old Fermin Quintanilla, of Arlington, broke into the house just after 3:00 a.m., went downstairs and caressed the female victim’s face when the male victim woke up and yelled at him.

“[The male victim] recognized the suspect from a cast on his arm that he was the same man who assaulted him a few days earlier,” Sternbeck said. “During that incident, the suspect approached the victim outside the victim’s house and started punching him.”

Sternbeck said the victims hadn’t had any previous interaction with Quintanilla, calling the alleged assault and burglary “random” acts. Quintanilla was arrested and charged with burglary and assault and battery. He is being held at the Arlington County Detention Center without bond.

More Stories
Your Beermonger: The Rise of Hoppy Session AlesOpen Houses in Arlington this Weekend