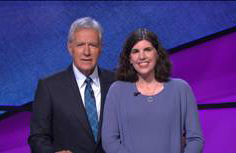 Jeopardy! host Alex Trebek has a lot of answers, and a local woman hopes she has the questions he’s looking for.

Arlington resident Melissa Jurgens, a lawyer, will compete on the popular quiz show. The segment was previously taped and airs tonight.

Although it’s a big secret whether or not Jurgens will advance, we are told she was able to meet and take photos with host Alex Trebek.