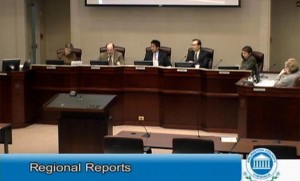 The Arlington County Board on Tuesday voted to join a nationwide campaign that’s trying to put pressure on the federal government to take greater action on the environment.

With the resolution passed by the Board, Arlington joins the environmental advocacy nonprofit Center for Biological Diversity’s campaign to urge the Environmental Protection Agency to “make full use of the Clean Air Act” to reduce greenhouse gas emissions. Arlington is the 70th municipality to endorse the campaign, a list that includes Washington, D.C., Baltimore, Chicago, and Los Angeles.

From the CBD’s press release:

“President Obama took another step last week toward deploying the Clean Air Act against greenhouse gas pollution, and now is the moment to push the federal government for ambitious action,” said Rose Braz, the Center’s climate campaign director. “Arlington’s leaders, like people in communities around the country, understand the dangers of climate change and are urging action through the passage of this resolution. To avert climate chaos, we must make full use of the Clean Air Act.”

With 32 heat records broken, 2012 was the third-hottest year ever recorded for Virginia. Rising temperatures bring the threat of additional heat-related illness and deaths, increased air pollution and drought. Just last week, coastal Virginia mayors and other local elected officials gathered in Williamsburg to call for increased state action on climate in light of serious local impacts, including flooding and sea level rise.

The Center’s Clean Air Cities campaign is working around the country to encourage cities to pass resolutions supporting the Clean Air Act and using the Act to reduce carbon in our atmosphere to no more than 350 parts per million, the level scientists say we must reach in order to avoid catastrophic climate change.