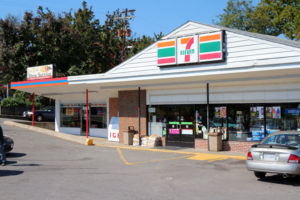 The 7-Eleven store at the corner of Lee Highway and N. George Mason Drive is expected to close later this month.

Franchise owner Aziz Ali told ARLnow.com that 7-Eleven’s corporate arm instructed him to close his doors by Oct. 21. The building is owned by Virginia Hospital Center, according to property records.

Ali said he and his wife purchased the 7-Eleven franchise earlier this year — in February, according to a 7-Eleven spokeswoman — but was informed two weeks ago that he would have to shut his doors.

“They didn’t tell us anything else,” Ali said. “We were completely in the dark. I asked ‘what if we don’t want to leave?’ and they said ‘we’ll force you out.'”

Before Ali purchased the location, it was a corporate-owned store. 7-Eleven spokeswoman Margaret Chabris said 7-Eleven has operated on a month-to-month lease with the hospital for two years, and had been in negotiations for a long-term lease, but it “could not be renewed at a favorable rate.”

A representative of Sam Torrey Shoe Service, in the storefront adjacent to 7-Eleven in the building, said that its business would remain open.