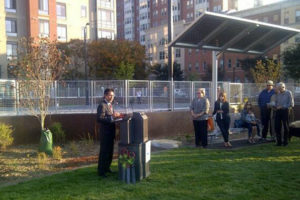 The park has an area for dogs and amenities like a picnic area and demonstration garden for people. Arlington County Board Chairman Walter Tejada helped cut the ribbon on the $1.6 million park, located at the corner of N. Herndon and 13th Streets.

But there have been some grumbles about the new park. The “crushed stone” surface, one of three installed at the dog park, has particular raised concern among residents.

“The gravel surface designed for the dogs to pee and poop on raises a lot of dust for the dogs and people to breathe,” wrote one park visitor. “One friend complained the stuff gets on the dogs and they are carrying it into the house. The same friend report the gravel got stuck in the paws of his dog.”

County Parks and Recreation spokeswoman Susan Kalish said the crushed stone “is common in urban dog parks,” and an underground irrigation system is in place to prevent dust. Kalish said the “pros and cons” of each surface — there is also synthetic turf and a rubberized surface — is why park planners decided to install all three. 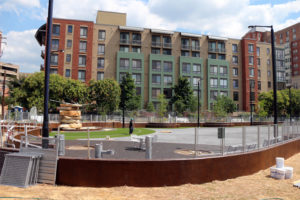 The park opened Aug. 30, and soon afterwards, the fountain stopped working. Kalish said earlier this month that there was a problem with the fountain’s pump, but the fountain has since been repaired.

Another complaint was that water in the fountain was chlorinated and murky with gravel. A sign warns against dogs drinking out of the fountain, yet some four-legged visitors have been spotted drinking out it anyway.

“Apparently the dog[s] can’t read the sign that says not to,” one resident said.

“Because we recycle the water in the fountain, we treat it with pool chemicals,” Kalish said. “Unless treated, water in fountains will promote the growth of algae and bacteria.  While we know that dogs have been swimming in pools all over the nation for decades and therefore believe that  the chlorine content in the water feature is low enough that most dogs won’t have issues, we wanted to warn people as every pet is different.  If a dog is well-hydrated prior to playing in the fountain he or she will be less likely to drink much pool water.  We’ve got a freeze-proof water fountain in the dog park area for them to use.”

Residents have also complained of a lack of shade in the evenings, heating up the metal benches to an uncomfortably high temperatures. Kalish said park planners expected problems along those lines.

“Shade was quite a challenge for our design team,” Kalish wrote in an email. “The park has plenty of shade in the morning, but it does lack shade in the afternoon — a problem during summer months. We planted trees around the park so that in time they will grow to dramatically increase shade.”

Photo (above) courtesy of Guus Bosman

END_OF_DOCUMENT_TOKEN_TO_BE_REPLACED

More Stories
Morning Poll: What Are Federal Workers Doing to Pass the Time?Arlington Pet of the Week: Pretzel