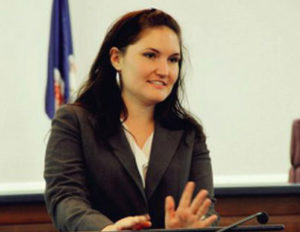 This week, we asked the candidates for competitive House of Delegates races in Arlington districts to write a sub-750 word essay describing why residents of their districts should vote for them on Election Day (Nov. 5).

Here is the unedited response from 47th District candidate Laura Delhomme (I):

My name is Laura Delhomme and I hope you will vote for me to be your Delegate for the 47th District.  Like other Libertarian candidates, I believe in civil liberties, free markets, and peace. I’ve spent my campaign promoting civil liberties and free market alternatives to the ever-increasing government spending and intrusion in our lives. While there are many things that I would like to work on as your delegate, the following three will be my primary focus.

It’s time for marriage equality in Virginia. In 2006, Virginians voted to pass the Marshall-Newman Amendment by 57%. This amendment to the Virginia Constitution not only says that a marriage between a man and a woman is the only valid marriage; it even outlaws things that “approximate the design” of marriage (so civil unions are out, and gays entering into contracts with each other is severely limited).  As I’m talking to people about this during my campaign, they’re shocked (appalled!) that this amendment was not only successfully passed, but voted on overwhelmingly by Virginians.  It’s been a short 7 years since then, but the tides have shifted in Virginia. Here in Northern Virginia, people are obviously supportive of everyone having the right to marry. Even as I talk to people in southern Virginia (as part of my support for Libertarian Gubernatorial candidate Robert Sarvis), people usually respond with “yeah, I’m confused why government’s even involved in defining marriage.” I am too!  In my ideal world, our government would not be limiting who we can enter into relationships or contracts with, and it definitely shouldn’t be defining marriage. But as long as the institution of marriage is so intertwined with our tax code (and frankly all other walks of life), we should treat people equally. Our government should not be the biggest discriminator of all.

I also want to end the state income tax. Ending the individual income tax would bring approximately $3,400 back to each household in Virginia.  People often ask, well what would we replace that tax with? I say nothing. There are tons of useless projects being funded, cronies playing favorites with subsidies, and oodles of inefficiencies in our government – cutting $10.2 billion from our budget would finally force a conversation about what we’re actually wasting money on.  From 2000 to 2012, state spending DOUBLED while our population only increased 15%. Let’s re-prioritize our spending, and put more money in everyone’s pockets.

And everyone’s favorite topic – legalizing marijuana.  I rarely run into anyone that disagrees with me on this: prohibition is a failure. We saw it in the 20’s with alcohol, and we’re seeing it now with marijuana. By prohibiting certain drugs, our government has taken a modest problem and turned it into a big one. Instead of it just being a bad personal decision, now there’s a black market for drugs where you never know what your product is going to be laced with. Making marijuana illegal does not keep people from using it; prohibition only drives it underground making it even more unsafe, ruins live with prosecutions, and wastes our tax dollars. Let’s legalize marijuana, then have an open conversation with our children about the true dangers of drug use.

END_OF_DOCUMENT_TOKEN_TO_BE_REPLACED

More Stories
Patrick Hope: Why You Should Vote For MeYour Beermonger: Coming Soon—a Guide to Breweries Arriving Now or Soon to Virginia