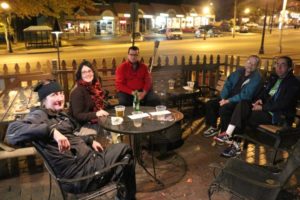 (Updated at 2:00 p.m.) Arlington Green Party members reflected upon another Election Day defeat in the race for the County Board Tuesday night, but the mood was far from somber.

Audrey Clement, running for the County Board for the fourth straight election, lost to incumbent Democrat Jay Fisette, 66 to 31 percent. She was actually encouraged by the results, but said the 30 percent range appears to be a Green Party candidate’s best possible result.

“In our best races we seem to be hitting up against a glass ceiling of 30 percent,” she said at the Green Party’s election gathering at Westover Beer Garden. “It seems we can’t break that ceiling. I think we will when the county breaks the budget.”

Clement said she was more disappointed with the result of the redevelopment and housing authority vote than she was with her own defeat in the election, because she believes the current housing situation could lead to more homelessness. The referendum was struck down with 69 percent of the voters choosing “no.”

“A lot of people in this expensive apartments are living from paycheck to paycheck, and eventually they’re going to be displaced,” she said. “When that happens, that’s when they will change their vote.”

Clement said she felt if voters understood the issue better, then they would have voted “yes.” The sample ballot she distributed at the polls explaining the issue, however, was long and difficult to read.”

“Next time around, we have to do a better job with our literature,” she said.

Asked whether she would run again, Clement said “it remains to be seen.” She lost her job as an independent contractor in July, and although she has since secured another position, she said it’s only temporary. Since her races are largely self-funded — she spent $3,855 on her campaign this year, according to the Virginia Public Access Project  —  the status of her next campaign is up in the air.

Despite the defeat, Clement and her Green Party compatriots were not discouraged. Party Chairman Steve Davis said “30 percent is really good for the Green Party in an election.”

“My campaign was a success,” Clement said. “It’s not quite winning, but it’s not bad to get a respectable vote. I feel worse about the housing authority because people are going to be suffering as a result of their lack of interest in the issue.”

The Green Party was just one of the third parties running for office in Arlington, in a year when Republicans didn’t have any candidates in any local race.

Jeffrey Engle, an independent running against Del. Rob Krupicka in the 45th House of Delegates District, lost with 25 percent of the vote to Krupicka’s 74.

“I wish all of the successful candidates the best of luck in their coming term,” Engle wrote in an email to ARLnow.com. “Our campaign was always focused on a positive message that moves Virginia forward, and we all will continue to work diligently to hold politicians accountable.”

Independent Green candidate Terrance Modglin, running against Del. Alfonso Lopez for the 49th District seat, said his campaign was worth the effort, despite garnering only 21 percent of the vote to Lopez’s 78.

“I was proud in this campaign to have laid out some clear and coherent policy priorities for this community and the Commonwealth,” Modglin said in a statement. “I involved many young people and adults from all walks of life, and I believe I inspired more people to value public service and their community. ”

Libertarian Laura Delhomme lost in the 47th District to Del. Patrick Hope, 77 to 22 percent, but she was also encouraged by the result.

“The Delhomme campaign is thrilled with the outcome of this election,” Delhomme said in a statement. “We’ve recruited members to the Libertarian Party, we’ve talked to countless people about various free market solutions and ways that government should respect each and every person; this was a wonderful year, and we look forward to getting ready for the next election.”