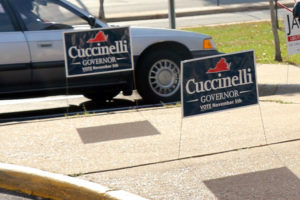 Arlington Republicans are planning to run candidates in local elections next November.

After a year where seats on the County Board and School Board and four House of Delegates districts were up for election and no Republicans ran, 2014 will not be a repeat, pledged Arlington County Republican Committee Chairman Charles Hokanson.

“We fully expect to be running local candidates in 2014 and beyond,” Hokanson told ARLnow.com. “This year, we prioritized our work on supporting the statewide Republican ticket in what correctly proved to be very tight elections, in the process building up our strongest voter identification and get-out-the-vote efforts in many years.”

Republican Attorney General Ken Cuccinelli received 22 percent of the votes for governor in Arlington, but Hokanson said the Arlington GOP “built up our largest active party membership in over a decade in 2013.”

“Arlington Republican voters know that we are a political minority in this County and understand that, to win races, our local party seeks to put forth credible, experienced candidates who will run strong campaigns, prove successful fundraisers, build issue-based coalitions that resonate with voters, and have the time to give it their all,” Hokanson said.

Hokanson said no one has yet declared for the 2014 races, which will include County Board, the School Board and Rep. Jim Moran’s House of Representatives seat, among others, but he said the GOP will put out a call for candidates this winter.