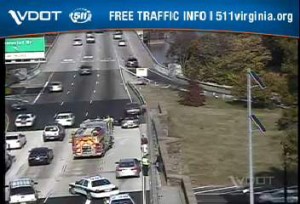 Three cars were involved in an accident on northbound I-395 just after 2:00 p.m. this afternoon.

The accident happened right in front of the on-ramp from the George Washington Parkway. Multiple lanes were blocked as fire trucks and police cruisers responded, but the cars have been moved so they are blocking only the right lane.

No significant injuries were reported.

Read more →
More Stories
Your Beermonger: Dreaming of a Belgian ChristmasOpen Houses in Arlington this Weekend