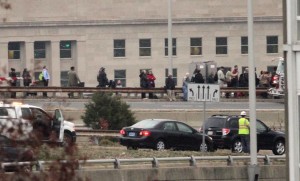 Several dozen OmniRide bus commuters are stranded on the side of I-395 after their bus reportedly caught fire.

The fire did not appear to be significant, but it did force the bus to the side of the southbound I-395 HOV lanes, near the Pentagon, and prompt a sizable emergency response that blocked the lanes for a period of time. One lane is now getting by.

Riders are lined up on the side of the highway, waiting for a new bus to arrive. An Arlington County ambulance has been dispatched to the scene for a rider reporting medical problems.