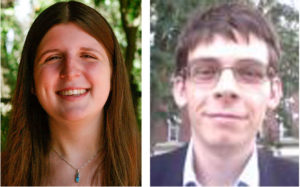 Two Arlington college students were named Rhodes Scholars this weekend, out of just 32 winners across the country.

Brian McGrail and Emma Pierson will receive funding to study at Oxford University in the United Kingdom for two to three years starting in October 2014. They were selected among a pool of more than 1,000 applicants.

McGrail lives in Arlington Forest, while Pierson’s home is in the Williamsburg neighborhood.

The Rhodes Scholarships were were created in 1902 to be given to students who meet the criteria of “high academic achievement, integrity of character, a spirit of unselfishness, respect for others, potential for leadership, and physical vigor.” McGrail and Pierson are now among 3,324 Americans who have ever been named Rhodes Scholars. From the Rhodes Trust’s announcement, here are brief biographies of Arlington’s two winners:

Brian W. McGrail, Arlington, is a senior at Williams College where he majors in political economy and history. A Truman Scholar and elected to Phi Beta Kappa as a junior, Brian is doing research on the effect of tax rates on income inequality, and on behavioral responses to taxation. Politically active, he is president of the Williams College Democrats, and interned on the Elizabeth Warren Senate campaign. He also serves on several college councils and committees. He has volunteered to help those with low income prepare their taxes, is a teaching assistant and peer tutor, and is a four-year member of the Williams varsity cross country team. At Oxford, he plans to do the M.Sc. in comparative social policy.

Emma Pierson, Arlington, graduated from Stanford in June with a B.S. in physics and an M.S. in computer science. Her classroom work was augmented by research in cognitive psychology and biocomputation. Emma is now working for Coursera, which provides free online education. She was president of the Stanford Debate Society, and won second place in the U.S. national debate championships. She also has done statistical analyses of sexism in sports and in responses to sexual assault trials, and has volunteered as a tutor. Emma intends to do a D.Phil. in computational biology at Oxford.

Photos via Stanford University, left, and the Rhodes Trust