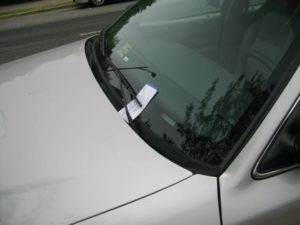 Drivers who are issued a parking ticket can no longer go to the police department to try to get it dismissed if it wasn’t issued in error.

Arlington County Police Department Chief Doug Scott and Commonwealth’s Attorney Theo Stamos agreed earlier this year that parking tickets that were issued correctly could no longer be reviewed by the police department, and all appeals would have to be taken to court. The policy took effect Oct. 1.

Tickets issued erroneously — for example, a ticket written at 6:05 p.m. for a meter that expired at 6:00 p.m. — can still be resolved administratively, according to Stamos.

When the ticket “was erroneously issued, in that case… the motorist will come to the police department and they’ll take care of that,” Stamos told ARLnow.com. “They’re going to continue to get rid of tickets that were erroneously issued.”

Before Oct. 1, a driver who was issued a ticket could walk into the police station and request a dismissal, and it would be up to the attending officer whether to enforce or dismiss the ticket. For instance, sometimes tickets for compliance violations like an expired state inspection sticker would be dismissed if the recipient could prove they worked quickly to get their vehicle inspected.

“[Chief Scott] didn’t like the idea of officers saying ‘you know what, we issued it, but we’re going to recall it, even though it was legitimately issued for a violation of some kind,’” Stamos said, noting the previously policy was also a drain on police resources. “If the recipient feels that it’s an injustice, they can go to court and deal with it in court.”

The process still involves showing up in person on a work day, something many ticket recipients decide is not worth the time and aggravation. Occasionally, for out-of-state visitors, prosecutors will conduct a dismissal discussion via phone or letter. Stamos estimated that 90 percent of ticket recipients are local.