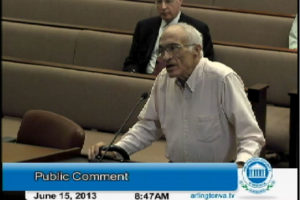 Robert Atkins, a longtime Arlington civic activist, died in his home Monday morning. He was 68.

Until this year, Atkins attended every Arlington County Board meeting since March of 1995, according to County Clerk Hope Halleck. The only meeting anyone can recall him missing is when he underwent recent surgery to have his foot amputated, Halleck said.

Atkins was the treasurer of the Arlington County Republican Committee for years, the president of the Bluemont Civic Association from 1993-1996 — when the neighborhood and the association were known as Stonewall Jackson — and was one of Bluemont’s delegates to the Arlington County Civic Federation when he died.

Atkins was born in 1945 and lived most of his early life in New York state, according to his friend and fellow Civic Federation delegate Suzanne Sundberg. He bought his house in Arlington on 5th Street N. in 1976 and lived there until he died “peacefully in his home,” Monday morning, Sundberg wrote in an email.

Atkins had been suffering health problems that shuffled him between hospital and long-term care centers in recent months.

He was a founding member of the Stonewall Jackson Citizen’s Association before serving as its president, and served as a Civic Federation delegate to the Arlington Gay and Lesbian Alliance and other local organizations. He also sat on a number of Civic Federation committees.

“Bob helped nearly anyone who asked him, irrespective of party affiliation or views,” Sundberg wrote.

Atkins was known for being both colorful and critical of the County Board’s policies when he spoke at meetings, but nonetheless, many county officials were fond of him for his sometimes humorous commentary and his unwavering dedication to civic engagement, we’re told.

“Bob was one of the Arlington GOP’s stalwart members for many years and a close friend and advisor personally,” he said. “His work as Treasurer from 2000-2012 was invaluable to the Committee, and he was omnipresent in our headquarters for many years, handling matters large and small, with  precision, insightful perspectives, and great wit.”

“Bob lobbied hard for fiscal accountability and responsibility where county finances were concerned,” said Sundberg. “It would be hard to find a more dedicated citizen than Bob Atkins. He will be missed.”