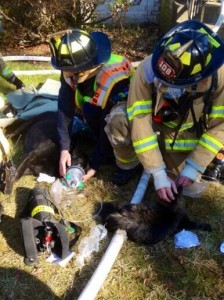 (Updated at 4:35 p.m.) Six cats died as a result of a house fire on Westmoreland Street, just over the Arlington border in McLean this afternoon.

A “small house fire” was called in at 12:30 p.m. today and units from the Fairfax County and Arlington County fire departments responded to the 1900 block of Westmoreland Street. The fire was extinguished “within minutes” according to Fairfax County Fire Department spokesman Capt. William Moreland.

One elderly woman, who was rescued from the home, was transported to the hospital with non-life-threatening injuries. When firefighters inspected the house, they found six deceased cats, and transported one cat and one dog to a nearby animal hospital.

Fire investigators are on the scene to assess damage to the house and to try to determine a cause for the fire.