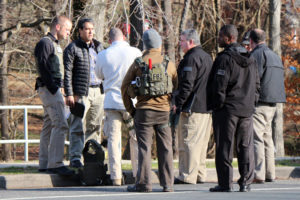 An FBI SWAT team observed while three men allegedly robbed the Wells Fargo at Columbia Pike and S. George Mason Drive at gunpoint on Tuesday, apprehending the suspects a block away after the robbery had been committed.

The men — two from Maryland and one from Washington, D.C. — had been under FBI surveillance after being suspected of committing several bank robberies around the D.C. area, according to federal prosecutors.

The men left the bank with $47,000, but were apprehended a block north on George Mason Drive. They have been charged with armed bank robbery.

Below is the full press release from the U.S. Attorney’s office.

Dana J. Boente, Acting United States Attorney for the Eastern District of Virginia, and Valerie Parlave, Assistant Director in Charge of the FBI’s Washington Field Office, made the announcement after the initial appearance of defendants Link and Stoddard before United States Magistrate Judge John F. Anderson.

The defendants each face a maximum penalty of 25 years’ imprisonment if convicted.

According to court documents and court proceedings today, the FBI received information in December 2013 that McNeal, Link and Stoddard had been responsible for the armed robberies of multiple banks in the Washington metropolitan area.  After identifying the subjects, the FBI kept the three men under close surveillance, which included observing the defendants as they cased banks in Arlington, Va. for potential robberies.

On December 31, 2013, FBI agents followed the three subjects as they drove from Maryland to a Wells Fargo bank branch in Arlington.  An FBI SWAT team was prepositioned near the Wells Fargo bank before the defendants arrived.  At approximately 1:15 p.m., Link and Stoddard entered the bank with their faces covered.  Link brandished a gun and pointed it at individuals in the bank, while Stoddard jumped the teller counter and removed approximately $47,000 in cash from teller drawers.  The two men exited the bank and returned to their vehicle, where McNeal was waiting.

As the three subjects attempted to flee the scene, FBI and Arlington County Police apprehended them approximately one block away.  A handgun and cash were found in the vehicle.  A search of McNeal’s house in Hyattsville, Md. led to the discovery of additional firearms, gloves and items of clothing that were linked to previous bank robberies.

Criminal complaints are only charges and not evidence of guilt.  A defendant is presumed to be innocent until and unless proven guilty.