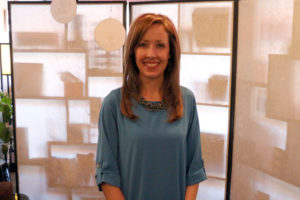 After growing up in a small town in Vermont, Lawlor wanted to experience a community of small businesses, where everyone knew each other and helped each other out.

“There wasn’t anything that met my needs,” she said. “I wanted businesses looking to cross-promote each other. I came up with holding an event, like a fair, where you can meet small businesses you haven’t been aware of. There are such a great number of small businesses here in Arlington, and it’s such a great community.” 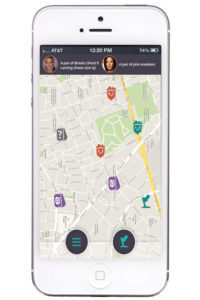 After the first year was a deemed a success — 80 businesses participated, and President Obama shopped at one of the stores, One More Page Books — Lawlor, 36, saw an opening. Customers flooded businesses, but, once they were at their store of choice, they didn’t know where else to go. She set about fixing that by designing an app that allows customers to see small businesses in their area, discover who sells what, and even see promotions in real time.

She called the app MainST (pronounced Main Street), and started designing the prototype in May. The prototype is complete, and she expects to launch the beta app in April. Her exporting business, started in 2007, serves clients like Sony, Macy’s and Costco, but she left last month to work full-time on MainST after receiving an angel investment — after her first pitch meeting.

“Every startup founder needs to make the decision at some point to go full time,” she said. “It’s tough because I loved my business, my clients and the travel. It was rewarding building something from scratch. Arlington Small Business Day grew my connection with the community and the amount of awesome small businesses that are here. It’s fun to be able to walk in and know the owner and know that you’re supporting them.”

That’s the motivation behind MainST. It’s a way for those inclined to support small, local businesses in a social way. Lawlor designed the first prototype with the help of a developer she found on CoFoundersLab — she’s now looking for a marketer on the same site — and by using Arlington Economic Development’s Entrepreneur in Residence program, consulting with Will Fuentes and Cary Scott of Lemur Retail.

Lawlor took the initial prototype around to some Arlington businesses, which led to some changes. The app was originally designed so businesses fill out their information and do most of the work, but now the app derives most of its content from consumers.

“Now we’re a consumer-driven model,” Lawlor said. “We’re asking consumers who already support the small business to take it one step further by sharing with the MainST community. They can get on the app, find the business, share it with their friends and take pictures of the things they’ve seen.”

There are three aspects to MainST’s functionality:

1. Spotting, when a user sees a store or a particular product.

Perhaps the most intriguing feature, with the passive search tool a shopper can post that they’re looking for a certain item — Lawlor uses her husband’s size 15 sneakers as an example — and MainST contacts the stores to ask if they have a product, and the stores then reach out to the user to tell them that they have it in stock.

“We’re taking the idea of crowdsourcing and making it work for people,” Lawlor said. “If you’re looking for something in particular it’s a whole other level of engagement.” 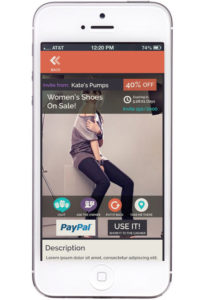 In addition, companies can offer “secret sales” to frequent customers on the app, and MainST even has the capability to keep track of store inventory when one is having a sale.

MainST will launch this year in Arlington, and while the company works on attracting a user base, Lawlor will also start building communities for Falls Church, Alexandria, Bethesda, and eventually Baltimore, she said. The plan is to be up and running in Alexandria and Falls Church in 2015 and Bethesda and maybe Baltimore in 2016. Consumers can sign up to become MainST’s first users.

Lawlor said the company will eventually make a profit through advertising, since the data it will collect is “a perfect way for businesses to focus on their community so they’re not wasting their money.”

“There’s no doubt in my mind that we’re going to grow organically,” Lawlor said while sipping from a mug of tea from House of Steep in Cherrydale, one of the businesses that’s getting ready to benefit from MainST. “I think it will become a whole new social network.”