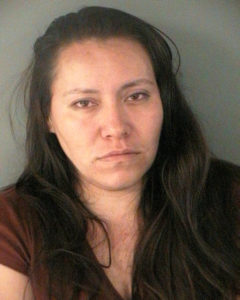 (Updated at 3:40 p.m.) The Alexandria woman whose infant died after being locked in a hot car for six hours on a sweltering July day pleaded guilty today to felony child neglect.

Zoraida Magal Conde Hernandez, 32, submitted an Alford plea, meaning she accepts the verdict without technically admitting guilt in the case. Hernandez and Commonwealth’s Attorney Theo Stamos agreed to two years and six months of probation, and, barring a violation, a dismissal of charges after that.

Assistant Commonwealth’s Attorney Molly Newton said Hernandez, after dropping two other children off at their summer activities in Alexandria, forgot that her 8-month-old son was strapped in his car seat when she drove to her job at the Catholic Diocese of Arlington and locked her car in the parking lot.

Newton said it was only when she picked up her 3-year-old daughter on July 5 at 3:30 p.m. did she notice the baby was purple and not breathing. Hernandez then drove to Inova Alexandria Hospital, where the baby was pronounced dead from hyperthermia with an internal temperature of 108 degrees.

“It has been a very difficult case for everyone involved,” Newton told the judge. “We’ve always believed the case has been a crime. The reaction from the community has not been such.”

Newton said that sympathy for the mother in similar cases has led to acquittals despite the evidence. Stamos said after the plea hearing that, in some jurisdictions, Hernandez’s crime wouldn’t bring charges. It’s unusual, Stamos said, for a felony case to “be adjudicated without a finding of guilt.”

“Clearly there are strong views on either side of this,” Stamos said. “It was difficult for the arresting officer, the medical examiner and the physicians involved.”

Stamos said an incident of a child dying in a hot car hadn’t happened in Arlington in 28 years. If Hernandez had been found guilty by a jury, she could have been incarcerated for anywhere from one day to five years. Newton said that, because Hernandez was incarcerated for two weeks before and after her bond hearing, the Commonwealth’s Attorney felt further incarceration wasn’t necessary.

“We want her to be accountable,” Newton said. “By entering this plea, she is. She has done everything we have wanted her to do.”

Hernandez’s other four children are still with Child Protective Services in Alexandria, and her case is making its way through that city’s administrative and court system, Newton said. Hernandez didn’t noticeably react during the proceeding, which took a little less than a half hour, even when Newton read the prosecution’s account of July 5’s event.