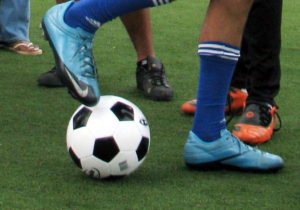 The Arlington Soccer Association’s club practices at the turf by Gunston Middle School (2700 S. Lang Street) have been targeted by thieves last week.

The ASA sent an email to soccer parents Sunday night alerting them that thieves had stolen items, including smartphones, from the fields while the teams were practicing. The first incidents of theft happened on Tuesday, according to the email, with soccer balls, phones and several travel bags taken.

“In response to the first incidents on Tuesday, ASA issued guidelines for personal property management to our travel team coaches and team managers that included specific suggestions to mitigate potential issues at Gunston and Virginia Highlands [Park],” the email states. “Despite this, issues continued several times during the week.”

One witness to a theft Tuesday night said it was perpetrated by a 15 year-old.

“A 15 year old youth grabbed two soccer backpacks and started running,” said the witness, who declined to be identified. “Fortunately, bystanders chased and caught the thief and held him until the police arrived. Since each backpack contained a smartphone, the police told us that he would be charged with attempted grand larceny.”

ASA said the Arlington County Police Department has agreed to station more officers, both on foot and in vehicles, at the fields during practice. The ASA has also issued guidelines to its players that include the best place to leave bags during practice at Gunston — behind the goal closest to the school — and a request for each team to provide two volunteers to help supervise practice.