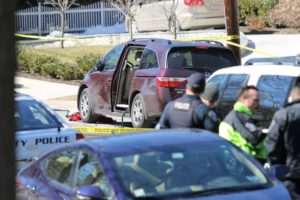 (Updated at 3:15 p.m.) A memorial fund has been established for Jennifer Lawson, the Arlington mom who was killed after being struck by a dump truck in front of Nottingham Elementary School yesterday morning.

Lawson, 39, was placing her two-year-old daughter in the rear seat of her minivan, after volunteering at the school, when the truck struck her and the side of the van. Her daughter was unhurt. Her two sons, who attend Nottingham, were inside the school at the time.

The family had recently returned from a vacation to Costa Rica, we’re told.

A close friend of the family, Trent Livingston, has set up a fund to “help offset the unforeseen costs of this tragic event” and to benefit Lawson’s three children. He hopes to raise $5,000.

“[Jennifer] was such a great mom, so devoted to her husband and her family,” Livingston told ARLnow.com from his home in Seattle. “She leaves behind so many friends who love her so much. This has just been so shocking and so terrible.”

So far, no charges have been filed against the driver of the dump truck. That could change at any minute, though.

“Because of the nature of the accident, the investigation is going to take a little longer,” according to Arlington County Police spokesman Lt. Michael Watson. “It’s much more in-depth than most accident investigations.”